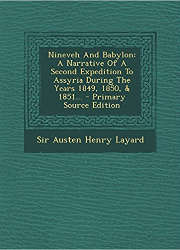 PREFACE:
This volume contains an abridgment of the narrative of my second expedition to Assyria and Babylonia, published in 1853, under the title of 'Nineveh and Babylon. I have described, in the Introduction, the principal discoveries on the site of Nineveh made after my return to England in the spring of 1851.
Further researches amongst the ruins after my departure from Assyria, and the contents of the cuneiformins criptions as deciphered by English and French scholars, have added toour knowledge of the history, the language, and the arts of the ancient Assyrians and Babylonians, but they have not led me to modify, to any material extent, the views put forward in my original work. I have noticed in the following pages the most important results of the interpretation of the Assyrian inscriptions.