PARLIAMENTARY CORRUPTION AS DEVELOPED IN ITS CONNECTION WITH JESUIT INCORPORATION 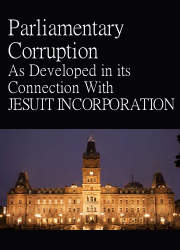 INTRODUCTION:
Pope Pious 9, in his well -known "Syllabus," as shown by Mr. Gladstone, has "condemned and anathematized, with fearfully energetic epithets, liberty of conscience or worship, liberty of speech, and the liberty of the press, and condemns as one of tb.3 monstrous errors of the day, that in countries called Catholic, the free exercise of other religions may be laudably allowed," and very bold indeed have his servants, the Jesuits, already become, when they would even attempt to gag the Protestant press in a Protestant Countrywitness their vengeful combination against the proprietors of the Toronto Mail; a transaction by the way, they can well afford to sustain, when the Do- minion, of which Quebec forms a part, pays their lawyers and foots their bills, by appropriating to their very benevolent, patriotic, and loyal use, the nice round sum of $400,000. It is true that Pope Leo 13, as Governor General and Chancellor of Canada's exchequer, did not feel disposed to entrust them with the whole of it : yet brother Jesuits understand well what that means, and that they will not in the future, on that account, lack anything needful, as the Pope's most zealous and faithful sons. Our Rev. Chancellor, the Pope, has other institutions in Canada co sustain, and His Holiness authority in connection with each must of course be duly recognized and acknowledged. When, however, a British Cardinal avers that "the Roman Catholic Church never will acknowledge any limit to her jurisdiction," as was the case but a very short time ago in London, it is time, I think, for British statesman to awake to the necessity of an effectual humbling of her proud pretensions by setting such a limit to her jurisdiction as shall cause the civil autocracy and spiritual harlotry of the old " mother of abominations" to henceforth and forever cease upon British soil, and throughout the entire extent of the British dominions. And if they do their duty as enlightened, consistent Protestant representatives, they will, as soon as possible, do it.