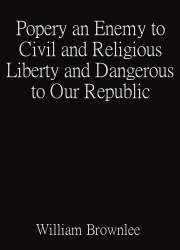 TO THE AMERICAN YOUNG MEN, THE FUTURE CITIZENS, AND MAGISTRATES, AND MINISTERS OF THE UNITED STATES.

Young Gentlemen: - I come before, you not as a sectarian; nor as a polemic. I come before you to beg a hearing on a subject, not only of the deepest interest to our holy religion, but involving, as I verily beheve, the very existence of our liberties, and the perpetuity of our Republic.

In the Roman Catholic religion, we have detected an invading enemy, audaciously conspiring, under the mask of holy religion against the liberties of our country: we have dragged it forward into the hght; we have stripped the vizor off its face; and have brought it up to your tribunal, for public judgment in the case.

It is a system of mere human policy; altogether of foreign origin; foreign in its support; importing foreign vassals; and sending a most baneful foreign influence over us. Its pope, and his priests, are politicians; men of the world, and mere men of pleasure. It is, as a system, in the hands of a foreign despotism, precisely what the Koran is in the hands of the grand Turk, and his muftis. It is a tremendous weapon wielded against peace and good order - the hilt of which is at Rome.

It is as intolerant in politics as it is in religion; it claims to tax the subjects and citizens of every country; it has interdicted nations; dethroned chief magistrates; dissolved civil governments; suspended commerce; annulled civil laws; and, to gratify its lust of ambition, it has thrown whole nations into utter confusion. It wages a war of extermination against the freedom of the press; and against the rights of human conscience, and the liberties of man. It aims at universal power over the bodies, and souls of all men: and history proclaims that its weapons have been dungeons; and racks; and chains; and fire and sword I It is now annually pouring in upon us, its armies of resolute men, -prelates, priests, monks, nuns, and hundreds of thousands of the very offscourings of the European Catholic population! And be assured, young men of America, that just as certainly as these sons of Belial shall reach the power which they lust after, in this land, they will enact upon us all the bloody scenes of Roman Catholic Europe; which will make the ears of every American citizen to tingle! Under Almighty God, the protector of our Republic, it is in your power, young men of America, to cause this enemy's "arm to be clean dried up, and his right eye to be utterly darkened!"