THE FOOTPRINTS OF THE JESUITS 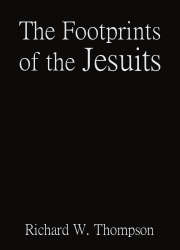 PREFACE:
The civil institutions of the United States could not have been formed without the separation of Church and State, and could not continue to exist if they were again united. Christianity could not maintain its primitive purity if politics and religious faith were mingled together; nor could the State preserve its capacity to provide for the general welfare if subjected to the dominion of ecclesiastical authority. Our success as a nation is mainly attributable to the fact that these sentiments are deeply imbedded in the American mind.

A party pledged to restore to the pope the temporal power which the Italian people have taken away, must necessarily be politico-religious in character, because it proposes to interfere with the temporal affairs of one of the European nations. And if the attempt to do this is justified upon the ground that such restoration involves religious duty, any one can see that the obligation is the same in the United States as in Italy, for the laws of God do not shift to suit the exigencies of human affairs.

In the times before the Reformation the temporal affairs of Governments were required to conform to the commands of the ecclesiastical authority  that is, the pope  and it was held to be a necessary and essential part of religion that this union should be continued, no matter what might be the degree of popular ignorance and humiliation. The founders of our Government started out upon a different theory, believing it to be their duty to separate "the things of God" from "the things of Csesar," so that each could reach perfection in its own distinct sphere. Therefore, it is clear that a politico-religious party in this country, pledged to unite Church and State in Italy, against the expressed will of the Italian people, not only must oppose one of the fundamental principles of our Government, but disturb the public peace.

To my mind it is also clear that a nation acts politically, and not religiously, when it decides upon the structure of its temporal Government  that is, whether its affairs shall be managed by an absolute or elective monarch, or by machinery provided by a written constitution. I have, therefore, refrained from the discussion or criticism of religious belief  as it is understood in the American sense  any further than it is made the pretext for the reversal of. this opinion, so generally prevalent in this country. It would be an evil day for the people of the United States if they should be persuaded to permit any power whatsoever, whether temporal or spiritual, at home or abroad, to share with them any portion of their political authority, or to dictate, in any degree, the measures of their civil polity.

In reminding those into whose hands this volume may chance to fall, of their obligations of citizenship under our popular form of government, I have found it absolutely necessary to portray the character of the Jesuits, but for whom, in my opinion, there would be but little to disturb us. This society has nothing in common with American ideas or principles. It represents monarchism in its most despotic and obnoxious form, by requiring each of its members to impersonate the most abject servility, and to accept this humiliation as an absolutely necessary part of religious faith. It has had a history unlike that of any other society in the world. In pointing out its origin and tracing its footprints among the nations, I have relied upon the most undoubted authority, much of which is furnished by Jesuit authors. A careful examination of the evidence will leave the mind of the reader in no doubt as to the odium which rested upon the society from the beginning, as well as the manner in which it has disturbed the quiet of the nations, defied the popes themselves when adverse to them, and disregarded the interest, welfare, and harmony of the Church it professed to serve, when required by its general.

I have deemed it important to trace out some of the leading events which have transpired under the pontificates of Gregory XVI, Pius IX, and Leo XIII, up to the present time. In this way only is it possible to understand the full meaning of the revolution which led to Italian unity and the overthrow of the temporal power of the pope by Roman Catholic populations, and what is involved in the demand for its restoration. In doing this I have considered only such matters as are politicoreligious, in the sense common among the people of the United States, and which can not be made a part of religious faith without doing violence to the recognized spirit of our civil institutions. Thus I have avoided any conflict with those who prefer the Roman Catholic to the Protestant form of religious belief, for the express reason that I have neither the purpose nor desire to question their right to do so. It seems to me that the constitutional guarantee which protects this right ought to be satisfactory to all, and can not be disturbed without imperiling our Government. Therefore, all I desire will be accomplished if I shall succeed in convincing thoughtful Roman Catholics that it will be far better for all of us if they shall decline to accept the politicoreligious teachings of the Jesuits as a part of their religious faith, and content themselves without interference with the political affairs of their Christian brethren in Italy. They may maintain fidelity to the Government as patriotically as professed Protestants, without abating their devotion to the spiritual doctrines which prevailed in their Church before the fall of the Roman Empire enabled the popes to place the crown of temporal royalty upon their heads. To this end I would, if permitted, appeal to that portion of our population in all sincerity, and invoke the exercise of their intelligence no less than their patriotism. And if any of them shall peruse this volume, and carefully consider its contents, they will see that what I have written centers in the hope that the Protestants and Roman Catholics of the United States shall live together in the concord of Christian fellowship, emulating each other in those things that shall tend most to promote their mutual happiness, and preserve for their common posterity the civil and religious liberty guaranteed by our Constitution and laws.